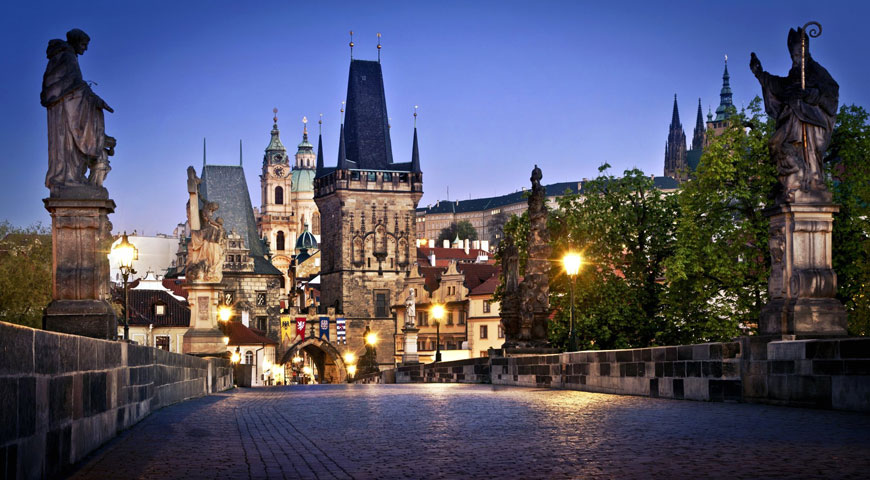 Prague is situated in Central Bohemia in the valley of lower River Vltava in an area known as the Prague basin.

The geological history of Prague region is more than 640 million years old. During this period the territory was flooded free times by the sea: the last time it was in the Secondary era, about 80-100 million years ago. The geological base is formed by the Precambrian and Paleozoic plants, in particular by slates, greywackes, silicious schists, etc. Together with Mesozoic sandstones and marlites (clay slates) originated from deposits at the bottom of the Mesozoic sea.

The highest point of the area is Petřín Hill (318 m), while Vítkov (270 m) and Vyšehrad ( 231 m) are among other significant high spots. In the Middle Ages, clay slates were mined on Petřín, and low lignite seams were experimentally excavated in the 19th century.

The determinant freshwater of the historical  Prague was the Vltava, which divides the town into two parts. The appereance of the Vltava has changed over the centuries. Numerous islands originated and disappeared there: weirs have regulated its body since as long ago as the Middle Ages.

The hammer ponds branched from the weirs. One of the oldest hammer ponds is the Čertovka with a length of 711 metres, which divides Kampa island from the Malá Strana bank. It was constructed in the 12th century.

The pilot water leads through Prague from Mělník under the pound lock of the Slapy dam which is accessible for ships with a capacity of 700 tons.

The climate of Prague is drier and warmer than would be expected from its geographic location. The city is protected from damp western winds by the hills that surround it. Mist, fog and smog-and cold air in the winter – are common in Prague basin due to insufficient winds.

Its convenient location on the intersection of long-distance routes influenced the origin of Prague. Both northward and southward from the town the Vltava flows through deep steep-sided valleys, and it was only possible to cross it by accessible drifts in the area of the Prague basin. So even in  the prehistoric times this place served as an intersection, joining several cultural region of Europe.

The historical core of Prague represents: Prague Castle and Hradčany, Malá Strana and Josefov, Nové Město and Vyšehrad. Since 1992 the historical core with the area of 866 ha was inscribed on the UNESCO World Heritage List.